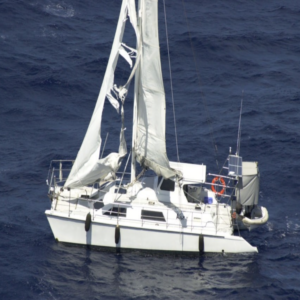 The Kaz II, dubbed “the ghost yacht”, is a 9.8-metre catamaran which was found drifting 88 nautical miles (163 kilometres) off the north-eastern coast of Australia on 20 April 2007. The fate of its three-man crew remains unknown, and the mysterious circumstances in which they disappeared have been compared to that of the Mary Celeste. ( On December 4, 1872, the unmanned Mary Celeste was found adrift in the Atlantic with its cargo fully intact. The fate of the crew and the reason for the abandonment of the ship remain a mystery.)

The Kaz II had a three-man crew, all of whom were residents of Perth, Western Australia: Derek Batten (56), Peter Tunstead (69) and James Tunstead (63).
Kaz II departed from Airlie Beach on 15 April 2007, and was heading for Townsville, Queensland on the first leg of a journey that was to take it around Northern Australia to Western Australia.The first indication that there was a problem came on 18 April, when a helicopter reported spotting Kaz II adrift in the vicinity of the Great Barrier Reef, and that its crew were potentially in distress. On 20 April, maritime authorities caught up with the boat and boarded it. They found the three-man crew missing in circumstances which they described as being “strange”.

The Queensland Emergency Management Office revealed that the boat was in serviceable condition and was laid out as if the crew were still on board. Food and flatware were set out on the table, a laptop computer was set up and turned on, and the engine was still running. Officials also confirmed that the boat’s emergency systems, including its radio and GPS, were fully functional, and that it still had its full complement of life jackets.There was even a small boat still hoisted on the stern of the boat, and the anchor was up. The only signs that were out of the ordinary, other than the disappearance of the crew, was one of the boat’s sails had been badly shredded, and that there was no life raft on board (it is unknown whether there ever was one aboard).

Search and rescue efforts began on Wednesday, 18 April, and Australian search and rescue AusSAR sent a Navy aircraft to search in the vicinity of the vessel in an effort to locate the missing men. At the same time, Bowen Voluntary Marine Rescue launched a coastal and island search. At night, an aircraft with infrared capability was used to search the reefs and cays. The next day, a full scale search-and-rescue effort was launched involving Volunteer Rescue Units from several towns as well as the Townville’s coast guard, two rescue helicopters, nine airplanes, and two commercial vessels. Data from Kaz II’s GPS system was also retrieved and analyzed in order to help narrow the search area.

Graeme Douglas, the previous owner of Kaz II, who had sold the boat to Batten stated the boat was in good condition when it was sold and that he had met the men on the night before they set sail. He also helped the men plan part of their route and was surprised to see that, according to the police, the men had deviated from their planned route that was programmed in their GPS system.

According to authorities in Townsville, the weather had been windy and the sea had been rough between the time that Kaz II departed and was found drifting. This led authorities to speculate that the crew may have experienced some form of sudden difficulty during rough weather and gone overboard. However, one issue with this theory is that contents of the cabin, including a table, did not seem to have been disrupted in any way. Also noted was the fact that Kaz II was found with its fenders out, leading to speculation that the boat may have docked with another as-yet-unknown vessel to which the crew might have willingly, or unwillingly. According to Maritime experts the only reason you ever put them out is when another boat comes aside or if you come to rest against a wharf. Townsville police stated that small craft commonly leave their fenders out at all times, making it impossible to draw any definitive conclusions about this feature.

One theory remains at the forefront of the investigation, a deviation of the ship’s course or wind direction could have easily caused a jibe, swinging the boom across the deck and knocking crew overboard. Since the boat was travelling before wind and at a speed of 15 kn (28 km/h), it would be out of reach of the men within seconds. 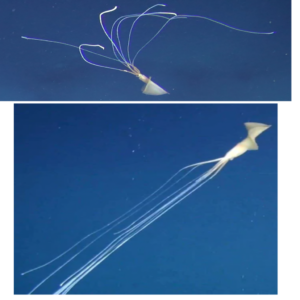 Other theories have arisen amidst speculation that they may have fallen foul of a Giant Squid, having been reported previously in Coastal waters of Australia. In this theory it is believed they may have been victims of a curious Gaint Squid who having seen the boat hull from the depths approached the boat from beneath to investigate. It is assumed the crew may have seen the big dark shadow in the water and leant over for a closer look and been snatched by the Slimy creature. It is reported that in this situation, the crew would be unable to fight off such an attack as the Giant Squids previously spotted were at eight meters (26 feet) long with a body or mantle length of 2 meters (6 1/2 feet). It weighed 250 kilograms (550 pounds). If one crew had become entangled with the beast the others may have tried to launch a rescue defensive and been swept overboard.

A less convincing theory was speculated about Alien abductions, which would explain the boat still being in tact, no signs of distress or struggle or damage, except the shredded sails which can be explained by being abandoned and adrift at sea. 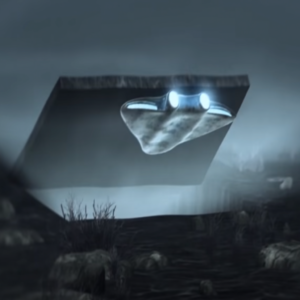 Whatever theory you want to believe , this reporter believes there are two major 2 facts:
– The Kaz II still had its full complement of life jackets on board when found.
– the men had deviated from their planned route.
Had these two important things lead to their demise? sailing without life jackets and deviating from their planned route seems to be against all water safety procedures.

I leave it up to you reader…What do you think?