The German Society for Rescue of Shipwrecked People (DGzRS) is the German non-governmental sea rescue organization that is responsible for the search and rescue service (SAR: Search and Rescue) in emergencies in the German part of the North and Baltic Seas. For this task, 59 lifeboats of different sizes are used at 55 stations. It was founded in Kiel in the 19th century.

The DGzRS does not receive any government funding and covers most of its costs through voluntary donations !!!!

Previous organizations and establishment of a unified society

The first German rescue station was founded in Memel, today’s Klaipėda, in 1802. The commercial corporation donated a lifeboat manned by a pilot. For the first time in Germany in 1827, volunteers tried to use cannons in the shallow coastal waters near Memel to shoot mountain lines at stranded ships. In 1839 the private institution came under state administration. 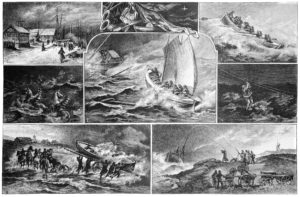 In the middle of the 19th century, around 50 ships per year crashed off the German North Sea islands. A lack of equipment and the beach law still in force often prevented rescue measures. One of the accidents was the sinking of the Johanne in 1854 off Spiekeroog, which killed 84 emigrants. Moved by such disasters, calls for the formation of a national rescue agency followed. But it was not until 1861 that rescue associations were founded independently of one another in Emden, Bremerhaven and Hamburg. The first rescue stations were set up on Juist and Langeoog.

On May 29, 1865, these societies united in Kiel to form the German Society for the Rescue of Shipwrecked People with the aim of rescuing people from distress at sea. Adolph Bermpohl, Georg Breusing and Arwed Emminghaus were among the initiators. The first chairman was the co-founder of the North German Lloyd Consul Hermann Henrich Meier. Heinrich Prince of Prussia was particularly interested in the DGzRS. From 1887 the DGzRS also had stations in Pillau, Memel and Mellneraggen. In 1910 there was a continuous and uniformly equipped network with 129 stations off the entire German coast from Borkum to Nimmersatt (East Prussia).

During the Second World War, the units were provided with the Red Cross and were under the protection of the Geneva Conventions. In addition to the usual rescue missions by seafarers, there were also rescue missions for downed planes from all warring parties.

After the Second World War and the division of Germany, the company lost a large part of its stations on the Baltic Sea. In the GDR, the GDR’s sea rescue service was set up at the same time. With German reunification in 1990, the company returned to its traditional stations between Poel and Ueckermünde in Mecklenburg-Western Pomerania and took over the stations of the GDR’s sea rescue service.

The DGzRS headquarters was built at Werderstrasse 2-4 in Bremen until 1954 based on plans by Friedrich Schumacher.

Since 2007 the society has referred to itself in public as DGzRS – Die Seenotretter. DGzRS Service GmbH sells merchandising articles from the company that make a small contribution to entertainment.

The DGzRS carries out its tasks autonomously and independently. The command center for all measures in the maritime SAR service of the Federal Republic is the Bremen Sea Emergency Line, which can be reached at any time via Bremen Rescue Radio. Internationally, it acts as the Maritime Rescue Coordination Center Bremen (MRCC Bremen) and monitors the German territorial waters and the German exclusive economic zones, which extend up to 400 kilometers like a “duck’s bill” into the North Sea. The DGzRS maintains 55 rescue stations (as of 2018) between the Ems estuary in the west (westernmost station is Borkum) and the Pomeranian Bay in the east (easternmost station is Ueckermünde) over a total coastline of 3,660 kilometers. In addition, the MRCC Bremen is also internationally active, as it works in accordance with the SAR agreement in conjunction with the neighboring countries and their MRCC and offers support for German ships and German seafarers at any time and anywhere on earth. 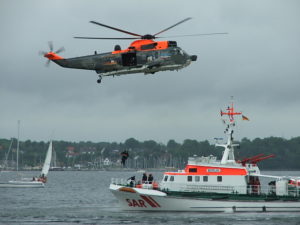 In addition to the rescue stations, the company maintains a SAR school in Bremen with a branch in Neustadt in Holstein, where rescue units that have been rededicated or specially built for training purposes are available. The company has 279 permanent employees, 180 of whom serve as sea rescuers on the rescue cruisers (SK). The volunteer stations with the lifeboats are manned by 800 volunteer sea rescue workers. Another almost 600 voluntary employees support the society in public relations on land at their fundraising, lectures or trade fairs.

Since 1872 the DGzRS has been recognized by the Bremen Senate as a legal person and is therefore an association under old law that does not have the addition “e. V. “leads. After the Federal Republic of Germany officially acceded to the 1979 International Convention on Search and Rescue at Sea (SAR) on April 19, 1982, the contractual requirements for the Federal Republic of Germany had to be implemented. Since the SAR services at sea were already carried out by the DGzRS beforehand, the responsible Federal Ministry for Transport, Building and Housing has given the DGzRS the state mandate to coordinate search and rescue activities in the German sea area.

The DGzRS is a full member of the International Maritime Rescue Federation (IMRF), the global alliance of sea rescue services that organizes the World Maritime Rescue Congress every four years.

The company is a non-profit aid organization and finances its core mission – searching for and rescuing people – through voluntary donations, including, to a lesser extent, monetary payments from the termination of criminal proceedings. She bills at least some of the technical assistance, and the health insurance companies reimburse her for patient transport. [3] According to her own statements, she only received tax money after the two world wars to rebuild her rescue fleet, and not at all since 1957. [1] Income comes from z. B. from membership fees and donations (approx. 74–76%), bequests, condolences and the like. (approx. 7–8%), contributions from shipping (approx. 7–9%), collective boats (approx. 6%) and donations from monetary issues (approx. 3–5%). In 2017, the general collection proceeds amounted to EUR 23.1 million. Together with the special purpose donations and the donations from foundations and inheritances, the total income amounted to 39.5 million euros. [1]

Every year around 85% of the total income goes to the rescue service, 10% is for public relations and 5% is for administrative costs. An internal auditor and an auditor ensure that the funds entrusted to you are checked regularly. In addition, the DGzRS is regularly checked for its non-profit status by the tax office. As a member of the German Donation Council e. V., the DGzRS has undertaken to disclose its structures, activities, projects and finances and to give an account of its work in an annual report.

The collecting boats (donation cans) in the form of a rowing lifeboat are part of everyday life in the coastal countries and have an “anchorage” in many public institutions and bars in order to offer as many people as possible the opportunity to “load” the boat. In recognition of their work, the Deutsche Bundespost dedicated a stamp with the motif of the collecting boat to mark the 125th anniversary of the DGzRS. 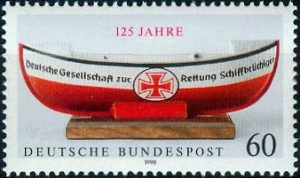 Every last weekend in July, the DGzRS presents its rescue cruisers and lifeboats at many of its stations. Visitors can visit the rescue units, experience demonstrations and talk to the crews. The operational readiness of the rescue fleet is always maintained. The first day of the sea rescuers took place under the motto “Mayday” on May 5, 1996 exclusively in the headquarters of the DGzRS. Since 1999, the DGzRS has organized the Sea Rescue Day annually at its rescue stations on the coast and on the islands.