We gathered together at 12pm, on Sunday, July 26th. Station Munro has a drill every Sunday at 12pm and Monday at 4pm.

We re-enact rescues, of downed pilots, from the WWII era. That is basically what we do, but we have other activities that we do, for a break.

(One is to go on a patrol, with armored patrol boats. While Munro is not a combat station, we do protect ourselves when fired upon. And to be effective, you must practice. So, we will go on patrols, and fire at drone ships that spawn in the Jeogeot Gulf. The other activity that we do is physical conditioning. The Naval Air Station has a boot camp, that we are allowed to use. It has an obstacle course, target range, and several more training modules.)

So, District 2 had been having a deployment, and Gokyu brought eleven people over from a deployment activity that had just finished. When the participants, for a drill, have arrived, the OIC must figure out what can be done with the people that have come to the drill. Are they Munro members? Are they certified on any of the Munro vehicles? Or are they new to Station Munro? In essence, what role will each person play?

That night, I had ten people come, that either never been to Munro or had been there several times. Since the role of survivor is more immersive, I decided to have all ten be survivors. I was fortunate enough to have LTJG Gokyu Ugajin and CDR Karen Cal, both pilots certified in all of Munro planes. (Karen is our “Airboss” – she does all of the checkrides for Munro planes.) Since I did not have enough crew to man a rescue boat and a patrol boat, I decided to have Karen and Gokyu, both, to bring out a Consolidated PBY-5A Catalina plane. The PBY has seating for five plus pilot, so I knew that the planes would be able to pick up the ten survivors.

Here is picture of a PBY at sea anchor, with her crew outside, on the plane. 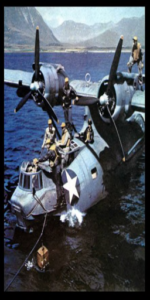 PBYs were often used for rescue, when a boat could not respond,.

Once everyone’s roles are decided, we begin our drill. The survivors teleported to the “rescue” sim. And, waited for their rescuers.
The pilots rezzed their planes, and waited for the MAYDAY call.

I, the OIC, decided that I would provide marine support. I rezzed an LRRC (Fairmile) and staged just outside of Station Munro and waited.
One of the survivors had been tasked with making the MAYDAY call, ENS Bo Juisser. She made the call and PBY 1 (Gokyu) answered, getting the essential information- how many involved, any injuries, and location. The second plane and the patrol boat acknowledged the call and began their response.