This is part one of a seven part series covering 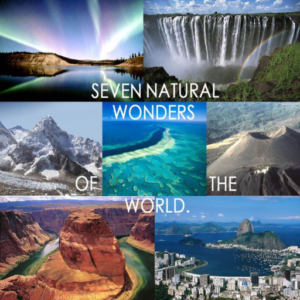 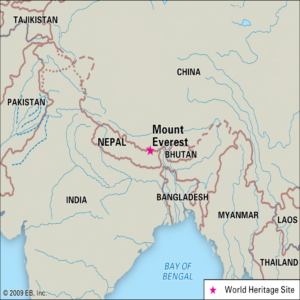 Mount Everest in the Himalaya mountain range is located between Nepal and Tibet. It is the tallest mountain in the world at 29,029 ft (8,848 m) above sea level. It is considered the tallest point on Earth and is still growing about a quarter of an inch higher a year.

The Himalayan mountains have long been home to indigenous groups living in the valleys. The most famous of these are the Sherpa people. The Sherpa have valuable experience in mountain climbing, which they can provide to other climbers. Most climbs of Everest would be impossible without the Sherpas’ logistical help and knowledge and because they live at such a high altitude year round, they are accustomed to the low oxygen levels. 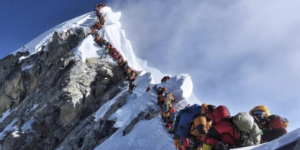 The snow and ice on the mountain create deadly hazards like avalanches, and there is only a limited climbing season due to bad weather conditions. But perhaps the biggest danger is the altitude. Most climbers are not accustomed to the high altitude and low oxygen levels and rely on bottled oxygen they bring along. This is why the area above 8,000 meters (26,000 feet) elevation on Everest is called the “death zone.” Climbers who spend long periods in this region can develop altitude sickness and even brain swelling. At that altitude there is less than 356 millibars (5.16 psi) of atmospheric pressure – where the oxygen pressure level is not sufficient to sustain human life. Effects of the death zone altitude include either directly (loss of vital functions) or indirectly (unwise decisions made under stress or physical weakening leading to accidents). In the death zone, the human body cannot acclimatize, as it uses oxygen faster than it can be replenished. An extended stay in the zone without supplementary oxygen will result in deterioration of bodily functions, loss of consciousness, and death. 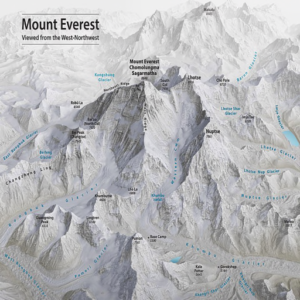 Mount Everest’s climbing industry has become controversial. As popularity of the climb has increased, there have been more “traffic jams” as climbers spend too much time in the death zone waiting for their chance to go to the summit. With more people has also come more pollution up near the summit as climbers often discard unwanted items all along the mountain. Most disturbingly, because many climbers have died along the way, and their bodies are impossible to retrieve, climbers must frequently travel past corpses as they make their way up the mountain. 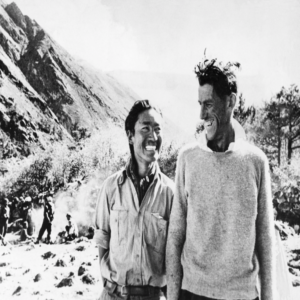 On 29 May 1953, as part of the John Hunt expedition team, Sir Edmund Hillary (20 July 1919 – 11 January 2008) and Sherpa mountaineer Tenzing Norgay ( May 1914 – 9 May 1986) became the first climbers confirmed to have reached the summit of Mount Everest and hold the record together. Edmund Hillary, who had a near-miss following a fall into a crevasse but was saved from hitting the bottom by Tenzing Norgay’s prompt action in securing the rope using his ice axe, which led Hillary to consider him the climbing partner of choice for any future summit attempt. Hillary and Hunt were knighted by Queen Elizabeth II, while Norgay received the George Medal for his efforts on the expedition. It was a death-defying feat of endurance that captured the world’s imagination. Since then, thousands of visitors have flocked to the mountain, and it is starting to take its toll. Today, Everest is so overcrowded and full of trash that it has been called the “world’s highest garbage dump.”

As part of the Commonwealth Trans-Antarctic Expedition Sir Edmund Hillary reached the South Pole overland in 1958. He subsequently reached the North Pole, making him the first person to reach both poles and summit Everest. Following his ascent of Everest, Hillary devoted himself to assisting the Sherpa people of Nepal through the Himalayan Trust, which he established. His efforts are credited with the construction of many schools and hospitals in Nepal. Hillary had numerous honours conferred upon him, including the Order of the Garter in 1995. Upon his death in 2008, he was given a state funeral in New Zealand.

Although Tenzing Norgay exact date of birth is unknown, he knew it was in late May by the weather and the crops. After his ascent of Everest on 29 May 1953, he decided to celebrate his birthday on that day thereafter.

More than 300 people have died attempting to summit the mountain. The last years without known deaths on the mountain were 1977, a year in which only two people reached the summit, and 2020, a year when permits were suspended by Nepal because of the COVID-19 pandemic. Most deaths have been attributed to avalanches, falls, serac collapse, exposure, frostbite, or health problems related to conditions on the mountain. Not all bodies have been located, so details on those deaths are not available.

The Edmund Hillary and Tenzing Norgay expedition was a death-defying feat of endurance that captured the world’s imagination. Since then, thousands of visitors have flocked to the mountain, and it is starting to take its toll. Today, Everest is so overcrowded and full of trash that it has been called the “world’s highest garbage dump.” 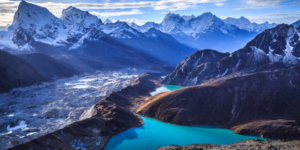 Sagarmatha National Park was created in 1976 to protect the mountain and its wildlife, and it became a United Nations Educational, Scientific and Cultural Organization (UNESCO) World Heritage site in 1979. The park receives around 100,000 visitors each year, and all those people place a strain on the natural environment. Deforestation plagues the local area, as people fell trees to make lodges and firewood for tourists.

During peak season, the park receives as many as 500 people per day making the hike to Base Camp, and the intense volume of visitors is eroding footpaths. But the biggest problem is on the mountain itself. Over 600 people attempt to summit Mount Everest every climbing season during the few weeks of the year when weather conditions are just right. In addition, for every climber there is at least one local worker who cooks, carries equipment, and guides the expedition.

Each of those climbers spends weeks on the mountain, adjusting to the altitude at a series of camps before advancing to the summit. During that time, each person generates, on average, around eight kilograms (18 pounds) of trash, and the majority of this waste gets left on the mountain. The slopes are littered with discarded empty oxygen canisters, abandoned tents, food containers, and even human feces. No one knows exactly how much waste is on the mountain, but it is in the tons. Litter is spilling out of glaciers, and camps are overflowing with piles of human waste. Climate change is causing snow and ice to melt, exposing even more garbage that has been covered for decades. All that waste is trashing the natural environment, and it poses a serious health risk to everyone who lives in the Everest watershed. 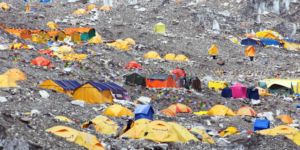 The Sagarmatha National Park watershed is an important water source for thousands of people living in communities surrounding Mount Everest. The watershed includes the land that directs rainfall and snowmelt from the mountains into streams and rivers. There are no waste management or sanitation facilities in the area, so garbage and sewage are emptied into big pits just outside of local villages, where they wash into waterways during the monsoon season. The local watershed has become contaminated, which could be incredibly dangerous to the health of the local people. Water contaminated with fecal matter is known to cause the spread of deadly waterborne diseases such as cholera and hepatitis A.

Both governments and nongovernmental organizations (NGOs) have attempted—and are attempting—to clean up the mess on Mount Everest. In 2019, the Nepali government launched a campaign to clear 10,000 kilograms (22,000 pounds) of trash from the mountain. They also started a deposit initiative, which has been running since 2014. Anyone visiting Mount Everest has to pay a $4,000 deposit, and the money is refunded if the person returns with eight kilograms (18 pounds) of garbage—the avegae amount that a single person produces during the climb. 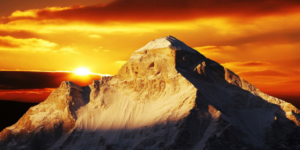 Since Edmund Hillary and Tenzing Norgay reached the summit in 1953, over 4,000 people have followed in their footsteps, and hundreds more attempt the climb each season.