It’s hard to imagine a quainter, more Australian event than this. 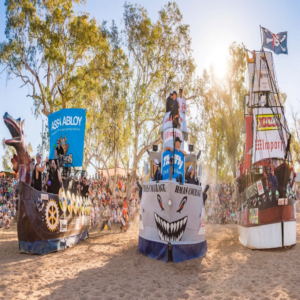 There are people paddling canoes with sand shovels, pirates brandishing water pistols, and flour bombs being launched in the outback. The Henley on Todd Regatta is, quite possibly, the world’s craziest sporting event.

On the third Saturday in August, Alice Springs holds a sailing and rowing regatta on a dry river bed. The regatta has been held for 58 years on the dry riverbed of the Todd River in Alice Springs. It’s testament to the Australian sense of humour. Word has it that it began as a joke at the expense of the original British settlers, poking fun at the stuffy atmosphere of the traditional English river races.

Instead of nibbling cucumber sandwiches and gracefully gliding across a rippling lake, participants in the Henley on Todd compete in ‘boat’ races in the style of the Flintstones: holding a metal frame and dashing for the finish line across the dry red sand of the riverbed.. The commentator describes it as “almost as dirty as the Yarra”. 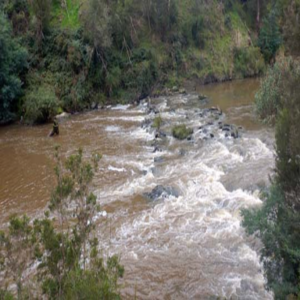 (The Yarra River is often referred to “the river that runs upside down” due to its muddy coloured water – caused by significant land clearing and development after the 1800s which resulted in tiny clay particles being washed downstream. The murky appearance of the river doesn’t mean it’s not clean.) 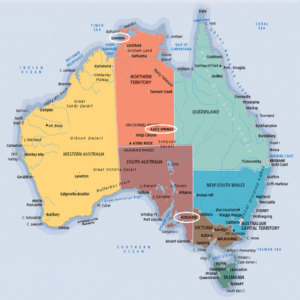 Getting to the Regatta is a major undertaking. It is a 16 hour drive to Alice Springs from either Darwin in the north, or Adelaide in the south, where the 2 biggest airports can be found. Most of the road is sealed highways from either city and boasts service stations and roadhouses along the way. There are direct flights to Alice springs from either major city as well, but bookings in advance is essential months prior to August. 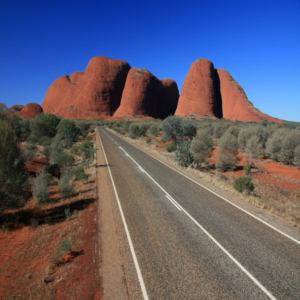 Reg Smith was the creator of the Henley-On-Todd, a unique, mad-cap event, which had its inaugural regatta in December 1962. Members of the Rotary Club of Alice Springs met for a picnic at 16 Mile Creek, where over a few beers they discussed ways to raise money for charity. Reg came up with the idea of holding a waterless ‘Regatta’ on the dry bed of the Todd River. He first came to Alice Springs from Victoria in 1946 as a meteorologist after his discharge from the RAAF. Reg then went on to work for the Met Bureau on Heard Island in Antarctica as a weather observer for twelve months, Reg returned to Alice Springs in 1949 as a local weather observer. In 1950, he compiled Alice Springs’ first tourist brochure, complete with map of outlying tourist attractions. In 1964 he was elected President of the newly formed Tourist Promotion Association. He was President of the Alice Springs Memorial Club (hub of the town’s social activities at that time).

The Henley on Todd is the only dry river regatta in the world; thus, it was the first regatta cancelled because of wet weather, on the occasion when there is actually water in the river. This happened in 1993, when the event was cancelled for the year due to flooding. 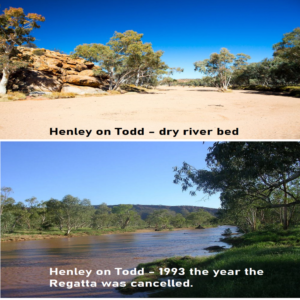 Boats are made from metal frames and hung with banners and advertisements, and teams of “rowers” run their boats in races through the hot sand. Races are also held in washtubs, human-sized hamster wheels and at the final event, modified trucks decked out as boats are driven by teams armed with flour bombs and water cannon. Many bystanders end up as casualties of the final battle. Traditional teams include Pirates and Vikings, complete with costumes. Who wins the final battle can be difficult to determine; even the announcers occasionally get a blast. 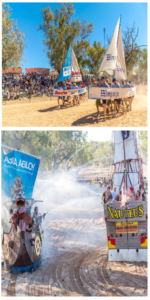 Sadly, last year’s extremely unexpected circumstances have had a disruptive, lingering effect on planning for the 2021 event, which prevents it from going ahead this year. In its sixty-year history the event has only been cancelled twice before, when the river had the audacity to flood, and due to last year’s COVID 19 mitigation measures.